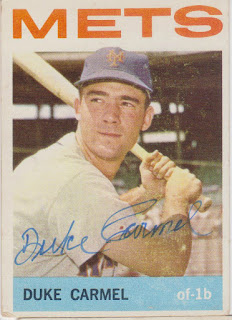 Here is the second of two cards that Duke Carmel signed for me through the mail in 2013. I posted the first card two months ago and it can be seen here. That card was Duke's 1960 rookie card with the Cardinals. I was also able to pick up this sweet-looking Mets card of him at the same card show to include in the TTM.

Duke, a New York native, played for the Mets for only the second half of the 1963 season after St. Louis traded him there at the end of July. He got into 47 games as a Met, playing center field and first base. Over those 47 games, Duke hit .235 with 5 doubles, 3 triples, 3 home runs, and 18 RBI.

He spent all of '64 in the minors, but resurfaced in the Majors in '65 as a Yankee. He played in just six games with them and went 0-8 at the plate. That was the last time he would play in the Majors. For his career, Duke hit .211 with 4 home runs and 23 RBI.