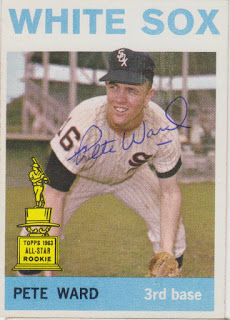 Here is a quick post of a card signed by Pete Ward. This is the second card of Pete that I have posted on here and the second one that was signed through the mail. I originally sent Pete his 1968 Topps card to sign in 2011. I obtained that card from the Topps Diamond Giveaway. I was content on only having that card signed until I came upon this card at the bi-monthly Wichita card show. When I saw that beautiful Topps rookie trophy on this card, I knew I had to get it and send it to Pete to get signed. So, I did just that and sent it to him in early 2013. I had it back seven days later.

Speaking of the Topps Diamond Giveaway, I really miss that promotion. They need to bring something similar to that back.

To see the '68 Topps card that Pete signed for me, click here. You will see how much better this card looks compared to his '68.
at 11:33 AM