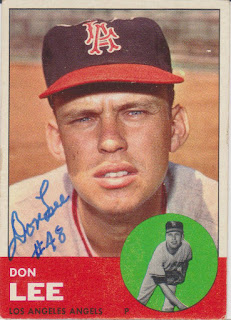 This one is of the former Tiger, Senator, Twin, Angel, Astro, and Cub, Don Lee. I mailed this card to Don on the last day of 2012 and I had it back eight days later.

Unfortunately, the halo on Don's hat is about as hard to see as it is on the last post of Buck Rogers. Maybe I need to find a card to get signed where that Halo is a bit more prominent.
at 7:11 PM