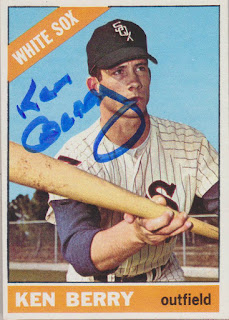 Here is a card that I got signed by Ken Berry at Rock's Dugout's bi-monthly card show in Wichita. I got three cards signed by Ken when he was there last summer.

I love going to Rock's shows, but I have not been to one this year. I suppose the main reason I haven't gone is because there have not been any baseball players there this year to sign autographs. On top of that, I have let my SCN account expire. Because of that, I do not have access to addresses and have not had the need to for some vintage cards. That is why all these old cards I am posting that were signed TTM are from two to three years ago.

This is actually the second card of Ken that I have posted on here. The first one was a card that I won from the Topps Diamond Giveaway. I sent that card to Ken in 2011 and had it back in just three days. That card can be seen here.

Speaking of Rock's Dugout, his card show is on Sunday. Again, there will not be a ballplayer there. But, Olympic bronze medal boxer, Nico Hernandez, will be there signing items for ten dollars.
at 10:12 AM

I have him on my radar to get a TTM request to. I should stop dragging my heels, huh?