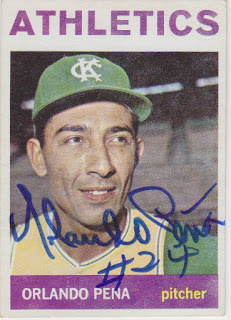 Here is the next card from the '64 Topps set that I got signed through the mail. I sent this card to Orlando at the end of 2012 and I had it back two weeks into 2013.

Orlando played in the Major Leagues for parts of fourteen seasons with eight different teams- the Reds, A's, Tigers, Indians, Pirates, Orioles, Cardinals, and Angels. Over that time, he appeared in over 400 games, starting just 93 of them. He played his first Major League game in 1958 and his final one in 1975 and finished with a 56-77 record with 40 saves and a 3.71 ERA.

Orlando had a lot of average seasons in the Major Leagues, so it is hard to pinpoint his best season. But, if I had to pick one, I would go with the 1973 season with the Cardinals. Orlando was thirty-nine years old that season and he responded with a career-best 2.18 ERA over 62 relief innings. He finished the year 4-4 with 6 saves and 38 strikeouts.

Orlando hit two home runs in his career. His first one happened to be a grand slam off of the Senators Claude Osteen.
at 10:41 PM