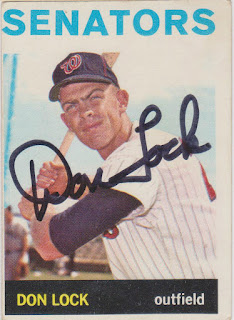 Don spent eight years in the Major Leagues, spending the first five with the Washington Senators. During that time, Don had two really good seasons in DC. That was in 1963 and '64, Don's second and third season in the Majors. Over those two seasons, he averaged a .250 average, 27.5 home runs, and 81 RBI. Even though he did not make the All Star team either year, he did collect some MVP votes for the '64 season. That year, he was clearly the best position player on a bad Senators team that finished the season 62-100.