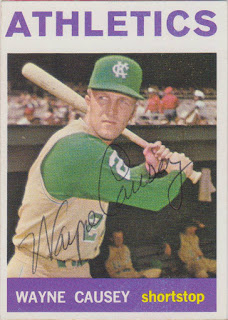 Here is the next TTM success. This one is from the former Kansas City A's, Wayne Causey. I sent this card to Wayne with a couple of days left in the year 2012 and I had it back two weeks into 2013.

In addition to playing for the A's, Wayne also played for the Orioles, White Sox, Angels, and Braves during his eleven year career. During that span, Wayne manned all of the infield positions except for first base, seeing more time at third than any other position. He was a .252 hitter for his career that clubbed 35 home runs and knocked in 285 runs.