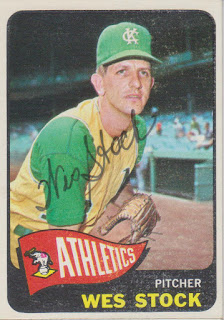 This is a card that I got signed by Wes Stock through the mail in 2013. I sent this card out the very same day as I did the previous card of John O'Donoghue. Wes was not quite as prompt as John was, but I still got the card back in less than three weeks time.

Wes played in the Major Leagues for parts of nine seasons with the Orioles and the A's. He pitched almost exclusively out of the bullpen and compiled a 27-13 record with 22 saves over 321 games. His career ERA was 3.60.

His best season in the Majors was probably the 1964 season. That year was split between Baltimore and Kansas City. He was 2-0 with a 3.92 ERA with the O's before they dealt him to the A's in June. He went on to pitch in 50 games with the A's that season and went 6-3 with 5 saves and a 1.94 ERA. On top of that, he struck out 101 batters in 93 innings of work. Even counting his innings in Baltimore that year, he still finished the season with 115 Ks over 113.2 innings. That was the only season of his career that he had more than a strikeout per inning.

I love the yellow Kansas City uniform on this card!
at 10:20 PM