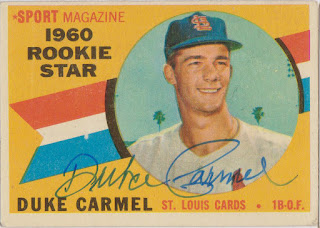 Here is the first 1690 Topps card of a player from eastern Missouri. And, for whatever reason, this is the third straight post where I sent the guy two cards to sign. So, there will be another card of Duke coming up next month. Anyways, I sent the cards to Duke early in 2012 and I had them both back nine days later.

Duke, whose real name is Leon, played in the Majors for just four seasons with the Cardinals, Mets, and Yankees. The New York native spent parts of two and a half of those seasons in St. Louis in 1959, '60, and '63. In '61 and '62, he ended up in the Dodgers and Indians organizations, but never made it to the big leagues with them. In fact, he got traded by the Cardinals three times. After he got traded to the Dodgers and Indians, he ended back with the Cardinals before the next season in what Baseball Reference lists as an "unknown transaction". The third time he got traded was when the Cards shipped him to the Mets.

Duke played in 71 games with the Cardinals and he hit .186 with 1 home run and 5 RBI. That one home run was a pinch hit home run in the bottom of the ninth off of Roy Face that tied the game for the Cardinals. They went on to win that game two batters later.
at 11:01 PM