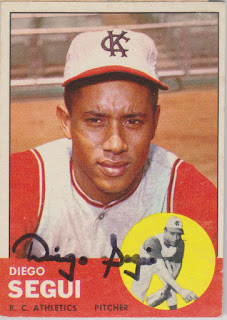 Back-to-back in-person autographs? That has not happened here in months. But here are two 1963 Topps cards, signed two and a half years apart, that were both signed in-person.

Diego signed this card for me earlier this season at a Royals game. It was at their annual Negro League game, the same game where I also got autographs from Joe Azcue and George Altman. Diego started his career in Kansas City and still lives in the area. So, it is nice when he can swing by the park to sign autographs, even though he never played for the Royals franchise.

This is actually the second card that I have got Diego to sign for me. I got him the first time at a Kansas City T-Bones game in 2010 when he was there for a Kansas City A's reunion. I posted that card later that summer and it can be seen here. That was the first Seattle Pilots card that I ever got signed.

Diego played in the Majors for fifteen seasons with the A's, Senators, Pilots, Cardinals, Red Sox, and Mariners. He mainly pitched in relief and he posted a 92-111 record with 71 saves and a 3.81 ERA for his career.

Despite playing for some good A's teams in the early '70s, Diego never appeared in a World Series game for them. He was on the team when they won it all in 1972, but did not get a chance to pitch against the Reds. Oakland traded him early in the '73 season, preventing him from pitching in that Series. But he finally got his shot to pitch in the Series in 1975 with the Red Sox. He made one relief appearance against the Reds and pitched a perfect inning.
at 11:08 PM

These vintage signed cards you've been doing the last couple of months are just fantastic.