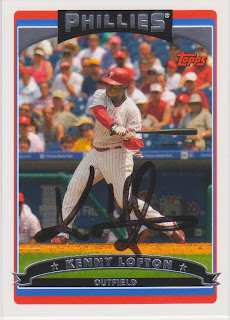 Here is the fifth and final card that I got signed by Kenny Lofton last year at the College World Series. Kenny signed at the Capitol One tent and, for some reason, there was a much smaller crowd there than at the main signing area at the AT&T tent. Because of that, I was able to go through the line three times. I could have gone through more, but I ran out of cards.

Here are the previous cards that I posted.

Even with the addition of this card of Kenny with the Phillies, I am still missing some of the teams he played on. I do not have signed cards of him as a Brave, White Sox, Giant, Pirate, Cub, Dodger, or Ranger. Kenny sure got around over the final few years of his career.

With the Phillies, in 2005, Kenny had a really good season. He hit .335 with 22 stolen bases. That was the second highest batting average he ever had for a season. His best average took place eleven seasons earlier while with Cleveland.

Kenny played in the playoffs every season except for one from 2001-2007. The one season he did not appear in the postseason was his year in Philadelphia.
at 4:35 PM