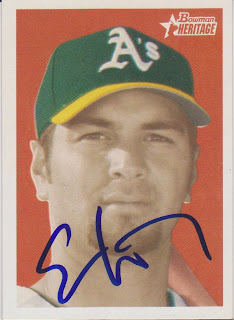 A few months back, I posted a card of Eric Chavez that I bought off of COMC for three bucks. I bought that card in 2013 just to add an autograph to my COMC purchase. Two months after buying that card, I went to Spring Training in Arizona and I got two cards signed by Eric before a game in Surprise. So, I basically bought the card for no reason, though it is a nice looking card. This is not the only time that has happened. The same thing happened with Jason Giambi.

Eric played for the A's for parts of thirteen seasons. He was a key component to the successful teams that the A's trotted out year after year in the 2000s. During that time, Eric hit 30 or more home runs twice and drove in a hundred runs or more four times. He did all of that while playing stellar defense, winning six Gold Gloves at the hot corner. Injuries slowed him down after the 2006 season, but he was able to bounce back from them and continue his career through last season before retiring.

It looks like Eric got a job with the Yankees and is going to be a roving minor league scout/coach.
at 10:52 AM