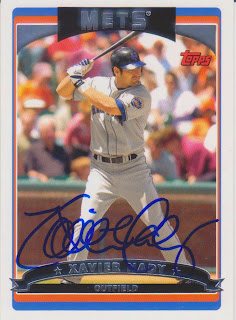 This is the third time I have posted a card of Xavier Nady on here, but the last two times were five years ago. Those two cards were Padrographs given to me by Rod. This one I got in-person in 2013 in Des Moines, Iowa when Xavier and his Omaha Storm Chasers were visiting the Iowa Cubs. Xavier was really good about signing, which you do not always get from a veteran Major Leaguer spending the year in AAA. But, he signed a bunch that day and signed all three cards that I had of him.

Though not as well traveled as Kenny Lofton, who I posted yesterday, Xavier did move around quite a bit. He started out with the Padres and spent parts of four seasons with them. That was his longest tenure with any franchise. Then it was off to the Mets for half a season before being dealt to the Pirates. He spent two seasons in Pittsburgh before being traded to the Yankees. He then played for the Cubs, Diamondbacks, Nationals, and Giants in a three year span before spending 2013 in AAA. Last year, he made it back up to the big leagues for a bit with his original team, the Padres. It currently looks like Xavier is not playing this year, so he might have called it a career. The most recent news article on him that I can find is about him opting out of a contract with the Mariners last season.