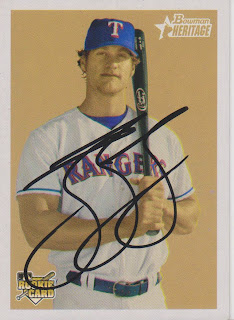 Here is the second of three cards that Jason Botts signed for me at a Wingnuts game last season. Jason was playing for the Grand Prairie AirHogs. I posted the first card in January and that one can be seen here.

In the last post, I talked about Jason's Major League career, which spanned parts of four seasons with the Rangers. In June of 2008, Jason got released by the Rangers and he went to Japan to play. He was with the Nippon Ham Fighters for parts of two seasons and he hit .252 with 6 home runs in 66 games. In 2010, he was back stateside and he split the season with the Nats AAA team and in the Atlantic League. He would split 2011 with the Mets AAA team and the Atlantic League again and that was the last time Jason played affiliated baseball. Since then, he has bounced around the Atlantic League and Mexican League before arriving in the American Association last season. With the AirHogs, Jason hit .320 with 12 home runs and 68 RBI.

Jason is not listed on the AirHogs roster right now so I have no clue who he will be with this season or if he will even play at all.

Nevertheless, I still love his signature.
at 8:42 PM

Nice one...I've been to a couple of Airhogs games!

I went to one back in 2009 and really liked their ballpark. Am-Ass games are fun