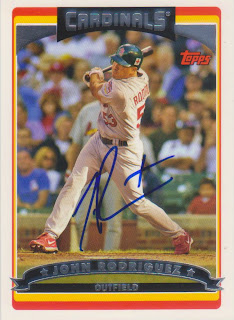 Here is the fourth and final card of John Rodriguez that I have to post on here. I posted the first one two and a half years ago shortly after I got it, and this one, signed at a Wingnuts game. John was in his first of two seasons with the 'Nuts and they were two highly productive seasons at that.

In 2012, John hit .332 with 16 home runs and 81 RBI. He then nearly repeated those numbers the following year when he posted a .337 average with 19 home runs and 86 RBI. John was supposed to rejoin the team for the 2014 season, but it never materialized. I thought he was going to go back to the Atlantic League to be closer to his family, but he has no stats for 2014. So, it would seem that John may have retired.

Nonetheless, John made it to the Show. He spent parts of two seasons with the Cardinals and hit .298 with 7 home runs and 19 RBI. Most of his playing time came in the 2006 season, yet it doesn't seem like he got a card in a 2007 set.

John made the Cardinals postseason roster in each of his two seasons in the big leagues. He did not do too well in October, though, as he went 0-9 with 1 run and 2 RBI. He did get one World Series at-bat, but he struck out against Detroit's Fernando Rodney. It all worked out, though, as the Cardinals won the World Series and John got his ring.
at 11:37 PM