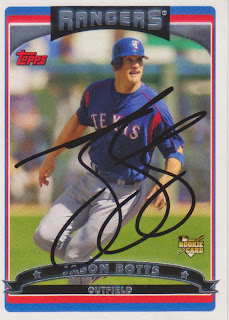 Here is the third and final card that Jason Botts signed for me at a Wichita Wingnuts game last season. Jason played for Grand Prairie. You can see the first card here and the second one here.

I still have not heard or read any news about Jason playing this year. He is not back with the AirHogs and he is not playing in the Atlantic League or Mexico. So, if nothing else changes, Jason's career may very well be over.

On a totally unrelated note, I am officially going on a ballpark tour this summer. Though my buddy and I took our families to Wrigley last year, we haven't been on one of our officially sanctioned ballpark trips since we hit up Target Field, and a couple of minor league parks, in 2011. This summer, we are headed to some uncharted territory as we fly out to the Pacific Northwest to see Safeco Field and the Seattle Mariners. We are then driving south with stops in Hillsboro, Oregon (Hillsboro Hops) and Sacramento (Grizzlies) before making our final stop at AT&T ballpark to see the Giants play.

I will probably try to get some 'graphs at the first three stops. I don't think I want to deal with 'graphing AT&T on the weekend. I plan on getting to Seattle early enough to 'graph outside as the players arrive. Since I have obviously never been there, any tips to help me out would greatly be appreciated.