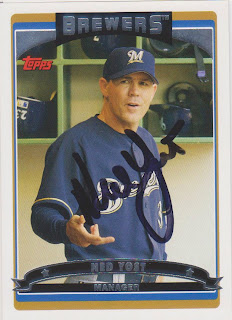 Remember when Topps reserved every 100th card in its set for the best players in the game? Well, it looks like they had discontinued that practice by 2006.

Here is a card that I got signed at Royals Fanfest last year. I have posted a handful of Ned Yost cards on here as a player, but this is the first one of him as a manager. When I got this card signed last year, I had no idea whatsoever that I was getting an autograph by the guy that was going to manage the Royals to the World Series and be the manager of the this year's American League All Star team.

But enough about Ned as a Royal. He was with the Brewers when this card came out, so I'll talk about his tenure with Milwaukee. Ned joined the Brewers for 2003 and guided them to a 68-94 record and finished last in the NL Central. The Brewers finished last the next year, too, with another 94 loss season. Things took an upswing in 2005 when the Brewers finished at .500. It was their first non-losing season since 1992. The team regressed a bit in 2006 before putting it together for a great run in 2007. The team finished 83-79 and ended up just two games back of the division leading Cubs.

The Brewers were poised to finally get over the top and make the playoffs in 2008, and they did just that. But, they did it without Ned, who, with a 83-67 record, got fired with twelve games left in the regular season. The Brewers were in a slump, having lost seven of eight, and the powers that be decided a change needed to be made. With the exception of the strike-shortened 1981 season, it is the only time a manager had been fired in August or later while his team was still in the playoff hunt.