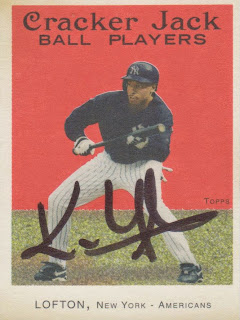 Here is the fourth card that I have posted from the Kenny Lofton signing at the College World Series Fanfest last year. Kenny was signing at the Capital One booth and I was able to make it through the line several times. Because of that, this is not the last of the cards that Kenny signed for me that day. I think that there is still one more to post.

The last card I posted of Kenny was of him as an Indian, the team I think of when I think of him. After his final season in Cleveland in 2001, Kenny became quite the journeyman. He played six more seasons after that and managed to play on nine different teams. He played for the White Sox, Giants, Pirates, Cubs, Yankees, Phillies, Dodgers, Rangers, and finished up an Indian. He played in the postseason every year during that journey, except for 2005.

Kenny spent all of the 2004 season with the Yankees. He got into 83 games that season and he hit .275. He stole a career low 7 bases that season. In the playoffs, the Yankees went to the ALCS and Kenny played in four games in the two series. He hit .285 that postseason with a home run and a stolen base.

After the season, Kenny was traded to the Phillies for Felix Rodriguez.

I like this set. I know you cannot tell by the scan, but this card is a mini. The weird thing about the card is that the text is upside down on the back. Are all of the cards from this set like that?
at 5:15 PM