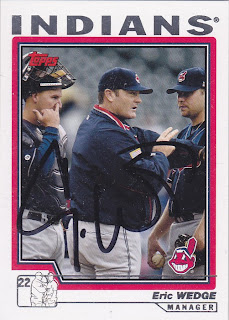 Here is the fifth Eric Wedge card that I have posted on here. The one difference between this one and the other four is that this is the first Wedge card on here where he is a manager. He was a catcher on the previous four cards which can be seen here, here, here, and here. I got this card signed by the visiting teams dugout when the Indians were in Kansas City in 2008. The black Sharpie may not have been the best choice to use on this card.

I'm not sure if that is Tim Laker or Josh Bard that is about to pinkie-pick his nose, but I'm glad that Topps didn't put him in the small foil picture on the bottom-left corner of the card. Since the card is of Eric Wedge, why did Topps even bother to put the pitcher in that picture?

In case you haven't heard by now, Eric Wedge is returning to the Major Leagues as he is the new manager of the Seattle Mariners.

Five Eric Wedge autographs down, one more to go.
at 1:33 PM

This might be the best partial nose-picking card ever.