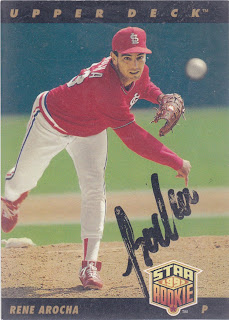 Here is another card that I got signed through the mail in the early to mid nineties. Rene was an up-and-comer for the Cardinals that defected from Cuba. He was 11-8 in 1993 with a 3.78 ERA and a 1:3 walk to strikeout ratio. For the next two seasons, he was used almost exclusively out of the bullpen and posted similar numbers (minus the wins and losses) with the exception of his strikeouts, which had fallen dramatically, in 1995.

By that time, arm injuries had caught up with him and he missed all of the 1996 season. The Giants gave him a shot in '97, and after a 7-3 start in Phoenix he was called up to the big club where he got shelled to a 11.33 ERA in six relief outings. He was released by the Giants and picked up by the Yankees. He spent the rest of the season in Columbus. He pitched in 11 games the following year for New Orleans, where he was 5-4 with a 5.45 ERA. That was his final year in professional baseball.
at 10:55 PM