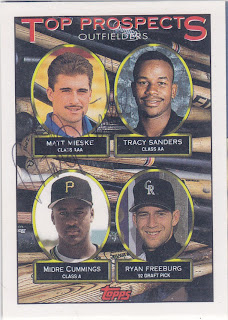 Here is another card that I got singed through the mail in the early to mid '90s. This is probably the worst card that I could have ever picked for him to sign. It doesn't help that he signed it with a ballpoint pin, but I don't think that a Sharpie would have turned out much better. There is just a lot going on with this card.

Mieske never really lived up to the prospect hype. He only appeared in more than 100 games twice. After he left the Brewers, it looks like he was mostly a pinch-hitter or defensive replacement (except for one half season with the Astros).

As for the rest of the players on this card, none of them ever did much either. Tracy Sanders spent eight seasons in AA, while only playing in 68 AAA games. Midre Cummings spent parts of eleven seasons in the big leagues, but never got into 100 games once. And Ryan Freeman only played three seasons of A ball before calling it quits. No, this card just doesn't compare to the catching prospects card in the set that has Mike Piazza, Carlos Delgado, and Brook Fordyce on it. You win some and you lose some with the prospect cards.
at 4:14 PM

It almost looks like Mieske drew a mustache on himself. But I guess that's his real mustache. Heh.

There are so many mid-1990s cards that give me bad fantasy team flashbacks. Midre Cummings. Ugh. I was so stupid.