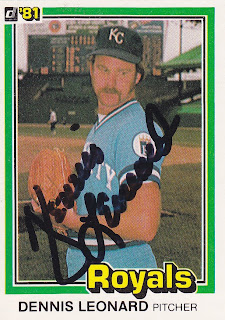 I was able to get this card signed at the Spring Into Sports youth baseball clinic a couple of weeks ago. I got cards signed by three former Royals that day, including Dennis Loenard. I was able to intercept the other two players on the way from the ballfield to the autograph signing. I didn't get to Dennis until there was a line of kids and parents wanting autographs. So, I waited for the line to finish before I went up there.

At the clinic, the boys were instructed by the Royals alums. The girls were instructed by one of the local high school girls softball team. Some of the girls on the team got at the end of the line to get autographs. Then they got some team pictures taken with the former Royals. I was trying to get my cards signed before the pictures, but was unable to. It looked like Dennis was signing his first name, smiling for the camera, signing his last name, then smiling for the camera again. It was like that for all three cards that he signed. I was kind of surprised that he signed all three cards after the last time I had a chance to get his autograph.

After the girls got done getting there pictures taken, they noticed the cards that Dennis was signing for me and they were like "whoa, is that you?". Dennis replied "yep, a long time ago". Then one of the girls said "wow, you must have been pretty good". Dennis said something like "I was just lucky to play on a good team". Nice answer, Dennis. I don't think Crash Davis could have said it better.
at 2:02 PM