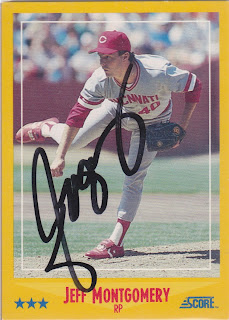 It seems like I just posted a Jeff Montgomery card a few weeks ago. Actually, I did post one that I have had for a few years (see the senior picture card here). But, this one I got at Fanfest. He was in the same group as Mike Macfarlane. I took my dad with me to Fanfest to help me double up on autographs and to hold my place in line (yes, I have a great Dad). We both went through the alumni line together when Fanfest started. I had three cards of each player at the table. Usually, they only sign one card per person. So, I took one card out of my autograph book for each player and gave it to my dad. That way, I was guarenteed two autographs from each player. Well, all three of them signed both of my cards which means that they probably would have signed all three.

So, my dad wasted his time in the line. I should have sent him over to the current players line where Alex Gordon was signing. By the time we got there, they had cut the line off and I was pissed since they weren't running the line like they were supposed to. They tried to tell me that only 150 people are guarenteed autographs. I told them that I understood that, but the program says that they are signing for 90 minutes and it will probably take less than an hour to get 150 people through. They said that I was wrong and that they are supposed to cut the lines off at the 150th person. I basically told them that they were ate-up and needed to pull their heads out of their asses. But, that was the first line for Fanfest. After that, they must have took my advice (removed head from ass) and there were no more problems in the lines. They cut the lines off at 150, but would sprinkle groups in as the line got smaller.

Anyway, Jeff was almost a lifelong Royal. He spent his first season in Cincinnati and has three cards as a Red. I figured that I would mix it up and get one of the Reds cards signed.
at 4:13 PM

Great seeing all these Reds coming through your publishing schedule. I still need to get some cards sent out to Jeff... he's apparently a great TTM signer.

I'm glad that you liked that little burst of Reds this week because I have some bad news. As of right now, I do not have another signed Reds card until I get to some '07 Josh Hamiltons. Sorry.

Good luck with Jeff. If you don't get around to sending any cards to him, let me know in about a year and I can get something signed for you at Royals Fanfest.