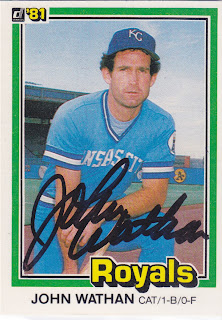 Here is a card that I got signed at Fanfest in January. John (like most of the Royals alumni) signed all three cards for me. And, of course, if I have a 1981 Donruss card of a player, it is going to be one of the ones that I get signed.

Another thing that I notice about this card is the way the positions are listed. CAT? What's wrong with just a C? 1-B and O-F? What's up with the hyphens? Donruss is in its infancy here and it is almost amazing that they lasted as long as they have.

Like John Mayberry, I had one card signed by Wathan prior to this years Fanfest. I got it signed at the same event where I got the Mayberry card signed. I even posted those two cards on the same day.
at 6:37 PM

That picture was taken at Exhibition Stadium in Toronto. The covered outfield seats are a big hint.

Wow, an Exhibition Stadium photo in '81 Donruss. I didn't even think about County not having covered seats. I first thought that it might have been Tiger Stadium until I saw the opening in centerfield.

Thanks for setting me straight.