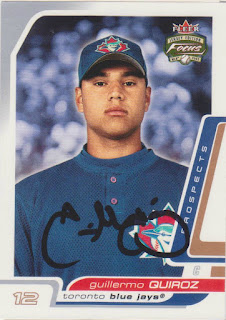 Here is a card that I got signed at a Sacramento Rivercats game in 2015. Quiroz was playing for the Cats at the time and he was nice enough to stop and sign two cards for me. I opted to get him in black because of the blue jersey and I must say that I am pleased with the results.

Back then, I used to always take a black and a blue Sharpie with me when I would go 'graphing. Since I used to do well with the Royals, it was a must with all the cards with blue jerseys like this one. But now the Royals are crap signers and I rarely bother with a black Sharpie any more. It is now blue or nothing.

Quiroz played parts of ten seasons in the big leagues with six different clubs. He topped out at 56 games in a season and was mostly used as a team's third catcher. There were five seasons when he played in less than five games and only two where he played in more than seventeen. For his career, he hit .199 with 3 home runs and 34 RBI.