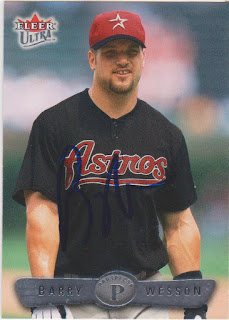 Here is the second card that I got signed by Barry Wesson at a Kansas Stars game two years ago. I posted the first card last week and that one can be seen here. Naturally, I did not have any cards of Barry prior to the Stars heading to Wichita to compete in the NBC World Series. Since he was probably the least known member on the team, I figured I had a pretty good chance of getting him to sign. So, I bought the two cards from COMC and Barry came through for me.

Barry played in 15 games for the Astros in 2002. In those games, he went 4-20 with a triple and an RBI. The Angles claimed him on waivers in September of that season, but he saw no time with them that year. He did play in 10 games with them the next season, though.

For his career, Barry hit .194 with 1 home run and 4 RBI in 25 contests. His lone home run was hit off of John Thompson of the Rangers.

I hate black jerseys on baseball cards. This auto does look slightly better in person than on the scan.
at 4:01 PM