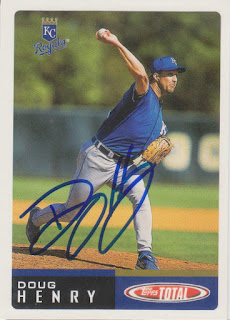 It feels like I have posted a dozen cards of Doug Henry on here. Since he was the Royals bullpen coach for five years, I would always head over in his direction whenever I was striking out with players at Kauffman Stadium. To my amazement, this is only the seventh card of Doug that I have posted. It will also be the last for some time as he no longer works for the big league club. I do have two more cards to post of him, but they are both minor league coaching cards.

Doug spent his final season pitching for the Royals. He did not do too well, but he still got a decent workload. He pitched 75.2 innings in 53 games and was 2-2 with a 6.07 ERA and 57 strikeouts. I saw him pitch eight times that season and he did slightly better when I was there. He picked up both of his wins during those games and had an ERA of 4.96.

With this signed Royals card, I have a signed card from Doug with every team he played for except the Giants. And the only reason I never got a Giants card signed by him is that there are none (as far as I can tell).

A few years back, I almost bought a game-used jersey of Doug's. It was only $10 at Royals Fanfest. Even though I knew I could get it signed, I did not buy it. Signed jerseys are kind of a pain and they take up a lot of room when framed. It would have been cool, but I resisted. I already have one jersey up in my room and I really don't have room for another.
at 10:50 PM