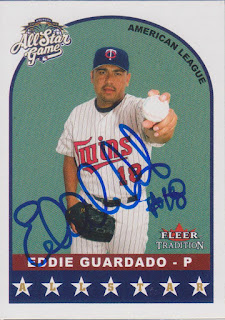 Here is a card I got signed last year when the Twins were in Kansas City. Eddie is the Twins bullpen coach and he stopped to sign for me after getting off the team bus. I asked him how he was enjoying coaching and he told me that it was "OK". I asked him why it was just OK and he told me that players are just too soft these days. It seems that Eddie and Mike Matheny are on the same page.

Eddie pitched for the Twins for the first eleven seasons of seventeen year career. Over that time, he held about every role a left-handed pitcher could hold. He started, was a LOOGY, did middle relief, and was a closer. Counting the seven games he appeared in for the Twins after being acquired at the 2008 trade deadline, Everyday Eddie was 37-48 with 116 saves and a 4.53 ERA with the Twins.

Eddie had back-to-back 40 save seasons with the Twins in 2002 and 2003. He racked up 45 the first year and 41 in the second. He was rewarded both years with an All Star selection, the only two of his career. This card represents his first selection. In the 2002 mid-summer classic, Eddie struck out the only two batters he faced- Andruw Jones and Jose Hernandez. Maybe if he would have pitched longer, or not relieved Barry Zito after he faced just one batter, the game might not have ended in a tie.
at 8:29 AM

I don't remember this guy at all but man that all star game was definitely memorable. Torii Hunter robbing that Bonds home run is something I'll never forget.

Zach, can you send me your address. I have some things to send you. padrographsatlivedotcom