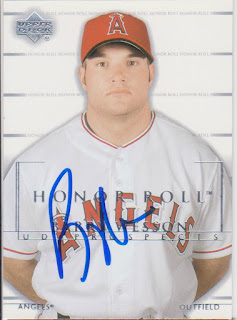 Here is a card that I got signed two years ago when the Kansas Stars competed in the NBC World Series. Barry was on the Stars team and was one of the first cards I got signed that evening. He was standing outside the batting cages taking practice swings and hanging out with his son. I asked him to sign and he seemed a little reluctant to, which surprised me. I would expect that from the bigger names at the event, but not from a guy that I had never heard of before he was put on the roster.

Barry played just 25 games in the Majors over parts of two seasons with the Astros and Angels. With the Angels, whom he didn't play a game with until the 2003 season, he got into 10 games and he was 2-11 with 2 runs, 1 home run, and 3 RBI. That dinger was the only one he hit in the Majors and it was hit in his final Major League game. Up to that point that September, Barry was 0-7 before getting the start in left in game 162. Batting ninth, he went 2-4 with 2 RBI in an Angels 4-2 win over the Rangers. Barry would play three more seasons in the minors, but never make a return to the highest level again.

Based off of this card, I do not think that Honor Roll is a good name for this set. I think that Upper Deck Mug Shot is a better description. The only thing missing is a placard with the player's info on it.
at 8:54 AM