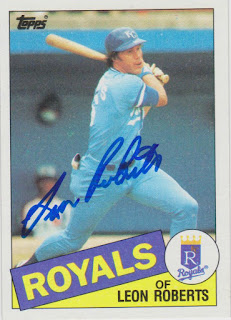 This post is just like the post from yesterday where I got a players '81 Donruss signed through the mail and then got them in-person a few years later. It was less of a gap for Leon Roberts, though. I got the '81 D signed in 2012 and then got this card signed in 2015.

I didn't actually get this card signed, my best friend did. We were at a Sacramento Rivercats game and he was nice enough to 'graph the visitors while I got the 'Cats. That is basically how it is if you go to a game with me; I am going to put you to work. Leon was coaching for the Fresno Grizzlies at the time and he signed three cards.

Leon played in the Majors for eleven seasons, yet I hardly have any cards of him. The only two Major League cards I have are this one and the '81 D. I had to dig up a Senior League card and minor league coaching card just to have three for him to sign in Sacramento. Leon is now a coach in the Royals system. I saw the Royals practice this spring and I didn't take any cards of Leon because I have none left of him.

Leon finished his career a Royal. He was traded to them by the Blue Jays for Cecli Fielder. I never knew Cecil was in the Royals organization. He got into 113 games with the Royals and he hit .252 with 8 home runs and 27 RBI.
at 5:06 PM