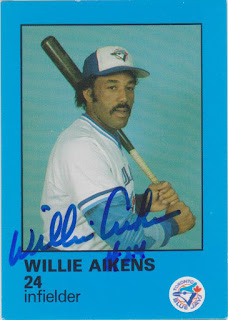 Here is another oddball that I was able to get signed at Royals Fanfest in 2014. This is a very blue set that was distributed by the Toronto Star and Midas. I cannot find any info about the set, but they are readily available from COMC, where I got this card. It is fun to note that the only positions listed on the cards are pitcher, catcher, infielder, and outfielder.

By the time this card came out, Willie Aikens Major League career was pretty much over. He only played in 12 games in 1985, hitting .200 with a double, a dinger, and 5 RBI. That home run that he hit was pretty memorable, though. It was of the pinch hit variety in the top of the ninth to tie the game. The Blue Jays went on to win in the tenth and Willie never played another game in the Major Leagues.

The College World Series field is set. Every team that is in was picked by at least one entrant. There were six number one seeds that advanced. There was one two seed and one three seed. Both the two and the three seeds were picked by BMan, who happens to be in the lead. Here are the standings heading into the Series.

The bracket portion of the contest will be up shortly. If you see any errors I might have made, let me know in the comments.
at 11:11 AM