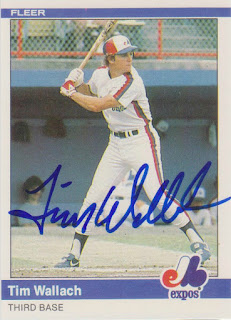 Here is the second of three cards that Tim Wallach signed for me outside of Kauffman Stadium. If you do not remember the first one, don't feel bad. I posted it three years ago, shortly after Tim signed these. Tim was working for the Dodgers at the time and was the only Dodger coach that signed all three cards for me.

Having been going to Royals games for almost twenty years now, it has been a long time since I went to a game really excited to see a certain player play. But, that excitement returned on the evening that the Dodgers came to KC. The reason for that was because I had the privilege of seeing Clayton Kershaw pitch. And, on top of that, it was his first start after his brilliant no-hitter of the Rockies.

While Clayton obviously could not pull off the back-to-back no-no, he still pitched an excellent game. He pitched eight innings without allowing a run and struck out eight.

Tim is now a coach with the Marlins. He followed Don Mattingly to Miami and is in the same role he was in with the Dodgers, the bench coach.
at 9:15 PM