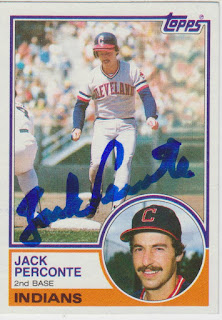 Here is the second of three cards that Tom, from The Angels In Order, sent me for helping him out with some 'graphs from Royals Fanfest.

Jack played in the Majors for parts of seven seasons with the Dodgers, Indians, Mariners, and White Sox. He did not see a lot of playing time until he ended up in Seattle in 1984. He was then a regular there for two seasons before ending his career with the White Sox in 1986.