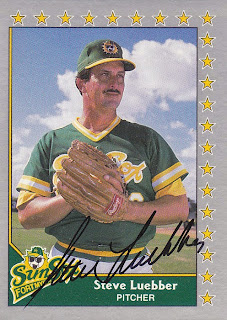 Here is a card that I got signed at Spring Training last year. Steve is the pitching coach for the Royals Carolina League team, the Wilmington Blue Rocks, and I was able to get him to sign this card after the minor leaguers worked out.

I was completely caught off guard by how easy it was to get this card signed. I had crossed paths with Steve three and a half years earlier and it was like pulling teeth to get him to sign for me then. I likened him to Will Ferrell's Mustafa character in the Austin Powers movie. You had to ask him three times to get anything out of him. This time around was the complete opposite. I asked him once and he stopped and signed with a big smile. To his credit, the first time I asked him was prior to a Carolina League playoff game and the second time was after a spring practice. I can totally understand how he was working when I asked the first go-around.

Steve pitched in the Majors for parts of five seasons with the Twins, Blue Jays, and Orioles. He both started and relieved and he posted a 6-10 record with 3 saves and a 4.62 ERA over 206.1 innings. Interestingly, he racked up two of his three saves in the same season that he pitched two complete games. The game is not played like it used to be. Case in point- Danny Duffy could have picked up an old-school three inning save yesterday. But, they put a different pitcher in for the ninth when the lead had been extended to 8-2. You want Danny to be a starter? Leave him in for the ninth and stretch him out a bit. You do not get that opportunity too often with todays specialized bullpens.

Anyway, for some reason, I cannot find any stats for Steve from the full season of the SBPA. But, I did learn that he was 1-1 with the Sun Sox, with a 3.07 ERA, when the league folded during its second season.

Steve has been the pitching coach for the Blue Rocks since 2007 and the first card I posted of him can be see here (hopefully the Austin Powers clip still works).
at 10:47 PM

Nice. That auto shows up nice. I'm glad he was nicer the second time around.