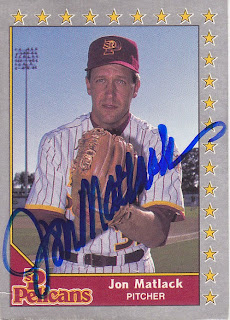 For the next month, I will be showcasing cards from my second favorite set, the 1989-90 Pacific Senior League set. For those not familiar with the Senior Professional Baseball Association, it was a league that lasted all of a season and a half and all of the players in the league were at least 35 years old. The league was based in Florida and the teams played a 72 game season over the winter. Poor attendance eventually forced the league to close its doors. I'm not sure if a league like that would do any better today, but I'm sure it would be a great place to get some autographs.

Most of the cards I will be showing from this set were signed through the mail when I mailed off an '81 Donruss card. This one, though, is an exception. While Jon does have a card in the Donruss set, I have not gotten it signed. Instead, I sent this card to him with his '74 Topps card that I unlocked in the Topps Diamond Giveaway. I had a little trouble getting the cards signed as they got "Return(ed) to Sender" at one point. But, a second attempt made it through and the cards came back a month later.

I did not send the '81 Donruss card to Jon because I did not have it at the time. I have it now, but my SCN membership has expired. I haven't sent out any TTMs this year, but maybe I will keep an eye out for Jon's new address.

This is a cool set with an interesting story behind it too! Just checked SCN for you, and this is the address used for John recently, with a success as of last week.

This was a great league for autos. I got a ton of sigs and other stuff from the league. I was a Pelicans season ticket holder.