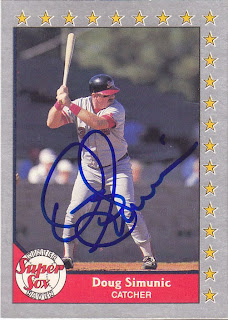 Here is a card of Doug Simunic that was signed for me at a Wichita Wingnut game in 2012. Doung is the manager for the Fargo Moorehead Redhawks and he signed this lone card for me before the game.

Doug was pretty unique when it came to the SBPA. He was one of the few guys in the league that never played in the Majors. He was drafted in the third round by the Expos in 1976. He then went on to play in the minors for nine seasons, spending parts of the last three at the AAA level. He spent time in the Expos, Royals, Indians, and Mariners organizations, but he never got the call. He ended up a career .249 hitter with 71 home runs and 361 RBI.

Doug started managing with the Rochester Aces in 1993. He spent one season there and two in Winnipeg before moving on to the Redhawks, where he has been ever since. During his tenure in Fargo, he has won five league championships and has been to the playoffs every year except for two. His clubs have had a winning record every season except for one. Not too shabby.
at 5:29 PM

That's a good track record. Nice to see a catcher!