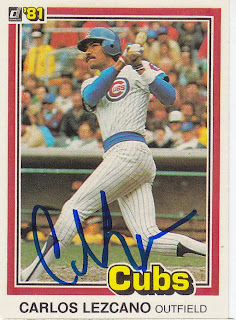 I've got about a month and a half to go on this set, but this one is the last of its kind. This is the final card that I got signed in-person. All of the rest of the '81 Donruss cards should be through the mail returns.

I was lucky enough to get this card signed at a Wichita Wingnut game this year. Carlos started the season as the hitting coach for the El Paso Diablos. By the time they made it to Wichita, Carlos was the manager for the Diablos, even though I did not know it at the time. Tim Johnson was the original manager, but he left the club because of an undisclosed medical issue. The Diablos were pretty hush-hush about the whole deal as I never saw anything about it on their website. Eventually I noticed that they removed Johnson from the website and some Google searching informed me of why he was not with the club. I was a little bummed out that he was not in Wichita as I had a '75 Topps mini that I wanted him to sign for me. I had met him the previous year and he seemed like a genuinely nice guy. I hope he is doing OK.