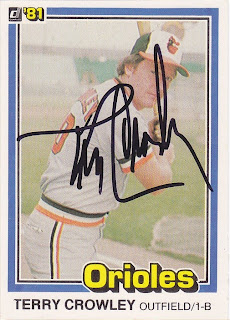 I am past the 500 card mark, so we are heading down the home stretch for this set.

Here is the Terry Crowley card that was sent to me from Ryan of The Great Orioles Autograph Project. He sent this card to me in April, along with the Al Bumbry card from the set and a bunch of other autos.

Terry was the batting coach for the Orioles fairly recently and I took my '81 Donruss card to get signed at a couple of O's/Royals games. But, I never had any luck getting this card signed by Terry. Needless to say, I was pretty excited when I saw this card in the package that Ryan had sent to me. I was even more excited when I saw that Terry now charges $12 per autograph through the mail.

Terry played fifteen years in the Major Leagues and spent time with the O's, Reds, Braves, and Expos. He played some outfield and first base, but he spent the majority of the time as a designated hitter or pinch hitter. He was a .250 hitter for his career with 42 home runs and 229 RBI. His best season came in 1980 when he had 200+ at-bats for just the second time in his career. He responded with career highs in home runs (12) and RBI(50).

As always, thank you , Ryan!