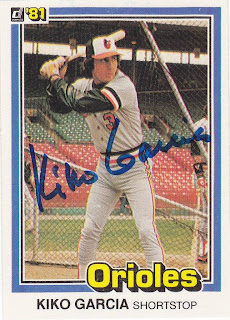 Here is the card of Kiko Garcia that I got signed through the mail last year. I sent this card to him at the beginning of November and I had it back nine days later.

Kiko played in the majors for parts of ten seasons with the Orioles, Astros, and Phillies. He was a part-time guy for most of his his career, though he was the O's regular shortstop for a couple of seasons. He was a .239 hitter who finished his career with 12 home runs and 112 RBI.