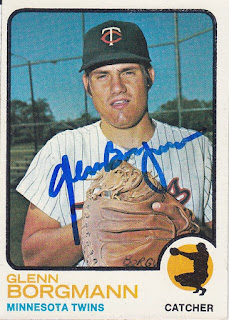 This is another card that I got signed through the mail earlier this month. Like Dave Rader a few days ago, I picked this card up from checkoutmycards and sent it along with an '81 Donruss TTM request. I sent the cards out to Glenn at the end of November and I had both of them back and signed about ten days later.

Glenn played in the Majors for nine seasons, spending all but one of them with the Twins. He was the Twins regular catcher for two seasons in the mid '70s before becoming a second or third string catcher for the remainder of his career. His best season came in 1974 when he hit .256 with 3 home runs and 45 RBI in 128 games. Glenn finished his career with a .229 average, 16 home runs, and 151 RBI.

I love Glenn's sideburns on this card. I also like how he has his name written on his glove. You don't see that in the Majors any more.