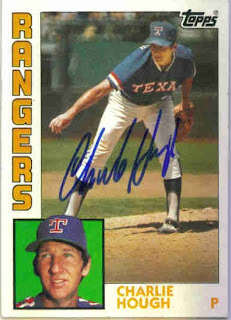 Here is the second of the three Hough's that I got signed through the mail last month. For me, this one is more like it. When I think of Charlie Hough, I think of him as a Texas Ranger. I pulled this card out of a rack pack last summer.

Unlike the Dodgers, the Rangers used Hough as a starter. From 1982 to 1988, Hough won at least 14 games a year and pitched over 225 innings every time. In 1987, he racked up 18 wins and recorded an astounding 223 strike outs, which was almost 50 more than he had ever recorded in a single season. He also issued 124 walks that year. He gave up 238 hits that year, but since he pitched nearly 300 innings, his WHIP was only around 1.27. That doesn't sound too bad for a knuckleballer.

What is up with the yellow lettering on the card? I realize that they were using bold neon colors around the head shot, but yellow? The Royals cards on here had Royals in blue and the Phillies card on here had Phillies in red. I guess that Topps was not a Ranger fan that year.
at 11:16 PM

Yeah, Topps had some goofy color schemes in the '80s. That is for sure.

That blue ink looks good even if the yellow doesn't.