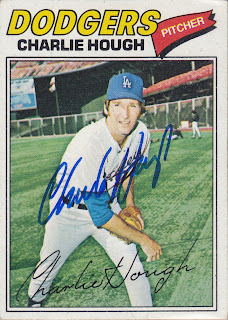 I got this card signed through the mail last month. Of course I didn't have this card, but I picked it up on ebay for a decent price. I sent him three cards and he signed all three.

I bought this card because I didn't have a card of him as a Dodger. He broke into the Majors with the Dodgers in 1970. He pitched there until the middle of 1980 when he was sold to the Rangers. With the Dodgers, he was mainly a relief pitcher, having made only 16 starts with them. It seems kind of strange to have a knuckleball pitcher used in relief since they have no idea where the ball was going to go. For most of his career, he averaged nearly a walk for every two innings pitched. I know that Jim Bouton and Tim Wakefield have been relief ptichers, but I wouldn't want a knuckleballer coming in with men on base. But, I am currently reading "Ball Four", so I may just be regurgitating what I have been reading.

Here is another great '70s Topps shot where the picture is askew. Either that or that fence in the background is going up a hill.
at 8:43 PM

Hough was pretty effective as a reliever. Of course it was a different time back then and relievers were used much differently.