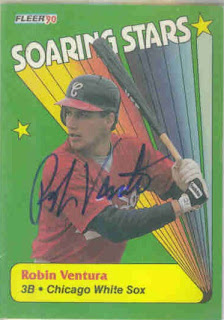 This card is from the Soaring Stars insert set. This is the only card from that set that I have. I bought a ton of wax of '90 Fleer and never got one of these, so it must have come in cello or rack packs. There are only twelve cards in the insert set.

I got this card for Christmas one year from my Grandma. Wal-Mart was selling these cards in the early or mid '90s. I think it was ten bucks for an autographed card and it came in a nice hard case and with a certificate of authenticity. The Wal-Mart in my town only had two different players, and Robin was by far the better of the two. I'll show the other one in a few months. Any guesses?

Robin had a long career in baseball and made lots of money. He made two All-Star teams and played in one World Series. He now does commentary for ESPN during the College World Series. But, for me, he is best remembered as being Nolan Ryan's punching bag.
at 6:50 PM

That card is just AWESOME. I love it!

I don't remember those, either. It had to be a retailer exclusive or unique to a certain kind of pack.

Not a bad looking card for 1990, though. (I think almost all the cards got hit with the ugly stick that year.)

I must admit that I have had this card for over ten years and never really looked at it until you two pointed it out to me. It is a unique card. There is no background from the photo. And the rainbow spectrum really adds somethinkg to it. I don't know what that has to do with soaring stars, but it is certainly unique. I just wish that I knew more about this insert set,

I believe those were inserted into cello packs randomly. I never found the Ventura card in anything that I ever opened.

I figured they were something like that. I assume that you have other "Soaring Stars" in your collection?
Come to think of it, this might be the fore-runner of the Rookie Sensation insert set.