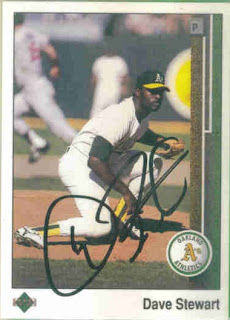 Here the first Upper Deck card ever shown on here. The blog is now entering the realm of the big five (Topps, Fleer, Score, Donruss, and Upper Deck). At this point, Topps' Bowman set is the only extra mainstream set being produced by the big five.

Here is the second Dave Stewart card on here. This one shows him as an Athletic, which is how I usually picture him. Dave really turned his career around in Oakland, but he was also helped out by an offense that could score at will.
at 11:47 PM