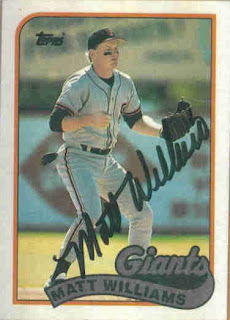 I got this card signed through the mail in the early '90s while Matt was still with the Giants. I just noticed this a few weeks ago, but at some point this card got a small crease in it. It's really hard to see on the scan, but it's right above his glove. Also, I was kind of surprised that the card listed him as SS/3B. I only remember his as 3B. It's like my 1980 Dale Murphy Topps card that lists him as a C/1B. Well, maybe it's not that bad.

Aww. I was hoping you'd go the whole blog without a Giants card ;) ... If you want that Arias auto that was on my blog, I'm looking for a Dodger auto or relic in exchange, or if that's not possible a couple cards off my want list. Leave me an email if possible.