The Rest of 2008 Tristar Projections 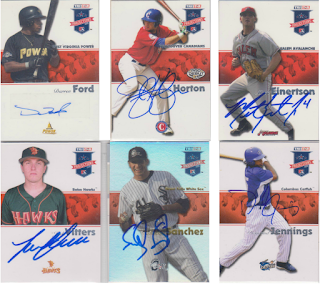 Darren Ford- Unlike the last card of Darren that I got signed at a Sacramento River Cats game, this one was pulled out of a pack. I actually bought the pack at the Kauffman Stadium gift shop for eight bucks just because it also came with an Eric Hosmer card. It worked out well as I eventually got the Hosmer card signed and I got an auto in the pack.

Josh Horton- I love the way this card looks. Josh's loopy blue signature just looks like it was made for this card. It is perfect. It definitely came out a lot better than the last card of him I posted when I had him sign in black. This card was signed at a Tulsa Drillers game in 2010 while he was playing for Midland.

Mitch Einertson- Mitch played for the Wingnuts for parts of two seasons and I was able to get this card signed at one of their games in 2012.

Josh Vitters- I got this card signed in Hoover, Alabama in 2010 while Josh was playing for the visiting Tennessee Smokies.

Salvador Sanchez- Sal signed this card for me the day after I got Vitters to sign. This time, though, it was in Birmingham at historic Rickwood Field for the 100th anniversary of the ballpark.