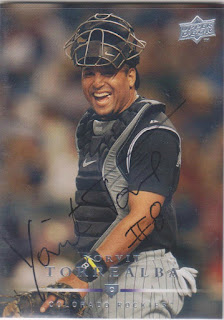 Here is a card that I got signed at Kauffman Stadium in 2009 while Yorvit was with the visiting Colorado Rockies. I was able to get him during batting practice and he signed just this one card for me. It is quite possible that this was the only card I had of him at the time.

Yorvit spent parts of thirteen seasons in the Majors, seeing time with the Giants, Mariners, Rockies, Padres, Rangers, Blue Jays, and Brewers. Over that time, he was mainly used as a back-up or platoon catcher as he only played in more than 100 games in a season twice- once with the Rox and once with the Rangers. Nonetheless, he still racked up a .256 average for his career with 56 homers and 339 RBI. His best season was with the Rockies in 2007. Though he hit .255, he had career highs in homers and RBI with 8 and 47 respectively.

I wish I would have used a blue Sharpie more often back then.

Hey I think i have Yorvit in Padrographs. I am posting some autographs for trade every Wednesday. I will have to feature some Royals,