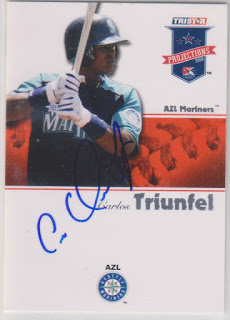 
Here is the last single card post from this set. Then, I will do a "rest of" post before moving on- moving on to another Tristar set, Prospect Plus.

So, here is a card that I got signed at a Sacramento River Cats game in 2015. Carlos was playing with the Cats at the time and was nice enough to come over and sign the two cards of him that I had.

Carlos played parts of three seasons, from 2012-14, with the Mariners and Dodgers. Over that time, he appeared in just 39 games with nearly half of those with the M's in 2013. In his 39 games, he got 81 at-bats with 13 hits. Along with his .160 average, he also had a home run and 6 RBI. His lone home run was a solo shot off of Colorado's Tammy Kahnle in Denver.