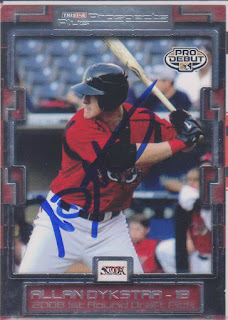 Coming into this post, I was assuming that I was going to be doing another post about a career minor league player. Unbeknownst to me, though, is that Allan made his Major League debut with the Rays in 2015.

The Rays picked him up as a free agent after the 2014 season and he made their Opening Day roster. He made his Major League debut in the Rays third game of the season and was 0-1 with a walk and a strikeout. He would go on to play in thirteen games that month before the Rays sent him down to AAA. During his time in the Majors, he hit .129 with a home run and 4 RBI. His lone homer was a three-run shot off of Yankees pitcher, Adam Warren.

Allan would only appear in 39 games in AAA before being released by the Rays. He then signed on with the Sugarland Skeeters to finish off the season. He called it a career after that.

What a whirlwind season. After being taken in the first round of the 2008 draft, he finally made it to the Majors in 2015, only to finish the season in the Atlantic League. It is a crazy game these guys play.