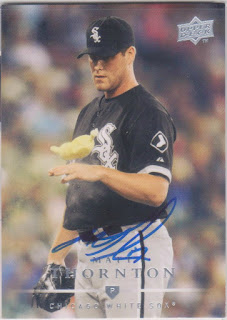 Here is a card that I got signed at a Royals game in 2008. It was a Sunday day game, so the best chance for getting autographs in the ballpark that day was going to be from the pitchers. Anymore, when the pitchers are out getting their work in, they only wear tees or jackets with no number on it. Because of that, I personally have a tough time identifying players at the park. But, it is always a little easier with the lefties because there are less of them to sort out. That was how I got Matt ID'd.

Matt pitched in the big leagues for thirteen seasons with the Mariners, White Sox, Red Sox, Yankees, Nationals, and Padres. Over that time, he appeared in 748 games and logged 662.2 innings. He was the definitive LOOGY. For his career, he was 36-46 with 23 saves and a 3.41 ERA. He appeared in the postseason twice and he made the American League All Star team in 2010.

I am very surprised that I got this card signed in blue instead of black. Black seems like it was my go-to in 2008.
at 10:17 AM